I am so happy to be part of the blog tour for Incendiary by Zoraida Córdova. 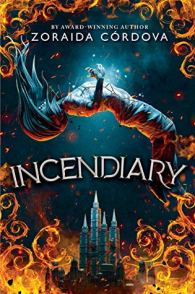 I am Renata Convida.
I have lived a hundred stolen lives.
Now I live my own.

Renata Convida was only a child when she was kidnapped by the King’s Justice and brought to the luxurious palace of Andalucia. As a Robari, the rarest and most feared of the magical Moria, Renata’s ability to steal memories from royal enemies enabled the King’s Wrath, a siege that resulted in the deaths of thousands of her own people.

Now Renata is one of the Whispers, rebel spies working against the crown and helping the remaining Moria escape the kingdom bent on their destruction. The Whispers may have rescued Renata from the palace years ago, but she cannot escape their mistrust and hatred–or the overpowering memories of the hundreds of souls she turned “hollow” during her time in the palace.

When Dez, the commander of her unit, is taken captive by the notorious Sangrado Prince, Renata will do anything to save the boy whose love makes her place among the Whispers bearable. But a disastrous rescue attempt means Renata must return to the palace under cover and complete Dez’s top secret mission. Can Renata convince her former captors that she remains loyal, even as she burns for vengeance against the brutal, enigmatic prince? Her life and the fate of the Moria depend on it.

But returning to the palace stirs childhood memories long locked away. As Renata grows more deeply embedded in the politics of the royal court, she uncovers a secret in her past that could change the entire fate of the kingdom–and end the war that has cost her everything. – synopsis from Goodreads

I knew I wanted to read Incendiary from the moment the book deal was announced. It made my most anticipated list for 2020 and I am so happy I got a chance to read an early copy of it. It is my first book by Zoraida Cordova and I am hitting myself for not picking up her books earlier. You can be sure I will go back and read her body of work.

As I sit to write this review, there are so many things that I want to say about Incendiary. I set out to read a story about magic and rebels but discovered so much within it that speaks of history. Zoraida said that it was inspired by the Spanish Inquisition period and from what I know of it it does definitely give us that feel.

The main kingdom in Incendiary is called Puerto Leones and there were many lions in this story. From a king that only cares about conquest and taking advantage of people to better suit his needs to the Justice a type of Sheriff if you will, that condemns all that rebels against his authority. But fear not trusty readers as for in every story that talks of injustice and corrupt kingdoms there is also hope. Because to quote Star Wars: “Rebellions were built on Hope!”

Renata is a girl with a complicated past. Stolen from her family and forced at a young age to use her powers on people to do the King and Justice’s bidding. Then brought to the Whispers a group of rebel spies with powers just like her that fight to help the Moria. Even many years later Renata hasn’t come to terms with everything she was forced to do. So much so that it pushes her to isolate even from her fellow rebels while thinking that she will never be accepted. I loved Renata. I thought she was an amazing thought out character that had many layers. Her power is feared by most. She is a  Robari which means she can steal memories from people. Memories are what makes us who we are and I can understand why there was a stigma against people with this ability in Incendiary. It’s scary to think that who you are, everything that you went through can be erased by just a touch of the hand. I think there is a correlation to do between the erasing of memories in the book and the erasing of culture in our own world through history. Reading Incendiary also made me think of the first explorers coming to America and claiming the land for a country across an ocean while killing and assimilating so many cultures.

The way the story is thought out speaks volumes on what a good storyteller Zoraida is. To have written a book so complex and make it seem effortless is astounding. Incendiary had so many twists and turns that I heard someone comparing it to a George R. R. Martin-esque novel and I don’t see this as farfetched at all. Incendiary kept me on the edge of my seat and made me want more and more. Did it deliver? Yes absolutely.

I cannot wait for book two and see where this series will go. From that ending, I am sure it will be epic. This was an absolute 5 out of 5 stars for me.

Thank you to Disney-Hyperion, Netgalley and Fantastic Flying Book Club for providing an eArc in exchange for an honest review.

This a shorter playlist than what I usually do and most of the songs are from Llasa de Sela. I love her voice so much. If you do not know her Lhasa was a latinx singer-songwritter that was born in New York but moved to Montreal in the early 90s. I think her voice has the capability to transport you. Her first album La Llorona is still one of my favourite

You can listen to the playlist HERE

I wanted to choose as many latinx actors as I could for this book. Though one from his description was a bit tougher.

Renata: Jeanine Mason
I don’t know much about her except she was a SYTYCD winner and as gone on to become an actress. I do think she has that type of vulnerability Renata tries to mask.

Dez: Diego Boneta
I love this guy. He is a pretty versatile actor that can play sweet and tough.

Castian: Charlie Hunnam
Ok he is a tad old to be cast in this role but I think he fits the description and is a great actor that could pull this off.

Justice Mendez: Benicio Del Toro
He is exactly who I pictured playing this role. He such a character actor that he would be astounding in this role.

Zoraida Córdova is the author of many fantasy novels including Star Wars: A Crash of Fate, the Brooklyn Brujas series, and The Vicious Deep trilogy. Her novel Labyrinth Lost won the International Book Award for Best Young Adult Novel in 2017. Her short fiction has appeared in the New York Times bestselling anthology Star Wars: From a Certain Point of View, and Toil & Trouble: 15 Tales of Women and Witchcraft. Her upcoming books include Incendiary, book one in the Hollow Crown duology (Hyperion 2020) and she’s the co-editor of Vampires Never Get Old (Imprint 2020). Zoraida was born in Ecuador and raised in Queens, New York. When she isn’t working on her next novel, she’s planning her next adventure.