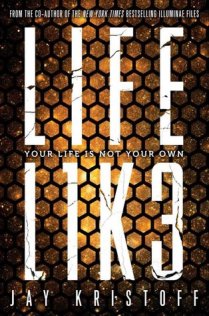 My rating: 5 out of 5 stars
Genre: YA Sci-Fi
Pages: 402
Pacing: Average/Normal
Publisher: Knopf Books for Young Readers
Published: May, 29th 2018

On a floating junkyard beneath a radiation sky, a deadly secret lies buried in the scrap. Eve isn’t looking for secrets—she’s too busy looking over her shoulder. The robot gladiator she’s just spent six months building has been reduced to a smoking wreck, and the only thing keeping her Grandpa from the grave was the fistful of credits she just lost to the bookies. To top it off, she’s discovered she can destroy electronics with the power of her mind, and the puritanical Brotherhood are building a coffin her size. If she’s ever had a worse day, Eve can’t remember it. But when Eve discovers the ruins of an android boy named Ezekiel in the scrap pile she calls home, her entire world comes crashing down. With her best friend Lemon Fresh and her robotic conscience, Cricket, in tow, she and Ezekiel will trek across deserts of irradiated glass, infiltrate towering megacities and scour the graveyard of humanity’s greatest folly to save the ones Eve loves, and learn the dark secrets of her past. Even if those secrets were better off staying buried. – Synopsis from Goodreads

Let me just start by saying that Jay Kristoff is my favourite author, so anything he writes is an instabuy for me. He could write a phonebook and I would buy it, it would probably be a riveting. So naturally I was going to pick up Lifel1k3, and let me just tell you the rat bastard is at it again.

Holy mimosas Batman! Talk about a rollercoaster ride. From start to finish the twist and turns in this book are non-stop. If you think you know something – you don’t. This book was described as Romeo and Juliet meets Mad Max, meets X-Men, with a little bit of Blade Runner cheering from the sidelines and that description is spot on. The book does have this type of futuristic dystopian western feel to it. Selling it as a bit Mad Max is perfect, I could almost hear the electric guitar playing in the background while the plot was unfolding.

It had all the snark and banter you come to expect in a Jay Kristoff book. He has this type of lingo all his own that he uses in all of his  books and it’s so perfect. If you’ve read the Illuminae Files you probably know what I mean, it’s hard to describe but it’s definitely creative. Be ready for loads of banter specially between Lemon Fresh and Cricket. These two were my favourite characters throughout the book. Don’t get me wrong all the characters were extremely well written and delightful but these two just connected with me more. Lemon Fresh is this small super spunky sassy girl, best friends with our main character and for me she stole the show. I wish I had a friend like this girl so we could just hang out and mess around. Her best moments were with this tiny AI named Cricket (don’t tell him I called him tiny), that has such a huge personality it’s hard to imagine how it’s contained in such a small thing. The level of banter between these two is about a 100 on 10. I burst out in laughter frequently when these two were around.

As in any of Jay Kristoff’s books there is a lot of humour, but there are also some very beautiful moments too. This is something I love about his writing, as much as it can be crude and raw it is also layered with beautiful heartfelt moments. Lifel1k3 was no exception, there are some moments when I got a bit teary eyed I must admit.

And as always, the rat bastard decided to end on wait for it… a cliffhanger (que exasperation from the ending of Godsgrave). I love and hate him for it. The ending of Lifel1k3 was such a what the frak moment, that I might have grunted and called him a series of colourful words.

Jay Kristoff, you Sir are the king of the rat bastards. Can it be May now? I just need Lifel1k3 #2 now. If you liked Illuminae I would really recommend you read this one.